Animal skin versus Veganism in the Millennial era

Animal skin has always been the most controversial material in fashion. While some people see the use of animal skins as the embodiment of cruelty, others consider it the most elegant material in the world.

Truth is that animal skin has always played an important role in human history; being the first material that gave humans heat and protection against the harshness of nature, and in ancient Egypt was a symbol of status and wealth. In fact, the European kings and queens created laws to preserve the right to use precious skins only for nobility, so the skins ended up becoming a status symbol rather than protection.

Later, and especially with the rise of Hollywood stars and women being used as sex-objects in the early twentieth century, the use of furs eventually became a symbol of extravagance and wealth; and this did not begin to change until the 70s when protests against animal cruelty and abuse began to increase. These protests reached their peak in the 90s, when well-known super models like Naomi Campbell posed nude for the PETA magazine with the slogan: “I prefer to go nude before using skins”. But the truth is that both Naomi Campbell and many other stars soon forgot what was said, and very soon they went back to using and posing with furs. 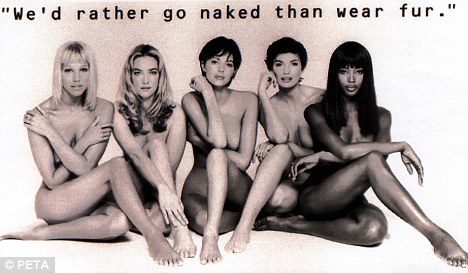 In general, we could almost say that the world forgot about the existence of skins until the late 1990s, which saw diminished the protest movements and gave the fur industry time to recover from the blow it had previously suffered.

Finally in 2010 it was possible to observe a rebirth of the skin and leather industry in fashion, and in 2015 animal skin featured more than 70% of the fashion shows, especially in Milan, New York and London, as well as renowned naturists such as the Argentine Claudio Bertonatti said: “veganism does not cause direct deaths, but what vegans eat (and many do not know), involves a series of processes in crops where animals end up equally affected in many different ways.” The debate is served.

Today the issue of veganism is again creating a great impact to the animal skin industry and the protection of animals. Truth is many firms are turning sides. Let’s take as an example one of the precursors of the modern era in this issue Stella McCartney who, -since the founding of her firm in 2001- she does not use any fabric with an animal origin and she has made a fuss with her shoes and accessories full made with pineapple skin. Same story with the recent announcement of Versace couture house “the use of animal skin it’s not modern anymore”, which will stop using this material in their designs and follows the same path of Gucci, Michael Kors, Calvin Klein, Armani, Ralph Lauren, Tommy Hilfiger or Jimmy Choo, which are all now fur-free.

For fashion brands, this shift of paradigm can be translated into something extremely positive if they know how to take advantage of it and consider to what extent Millennials value the social commitment of their favorite companies. As the consultancy Deloitte corroborated Vogue.es, “Millenial generation is undoubtedly the most ethical to date, and fashion has always been about trends and emotions, to anticipate consumer desires.”

So if we make consumers to feel identified with the values of a brand and we take into account new trends and society changes, will we be able to offer them exactly what they want even before they know they want it? Think about it. Maybe that is the key to success.

This website uses cookies to improve your experience while you navigate through the website. Out of these cookies, the cookies that are categorized as necessary are stored on your browser as they are essential for the working of basic functionalities of the website. We also use third-party cookies that help us analyze and understand how you use this website. These cookies will be stored in your browser only with your consent. You also have the option to opt-out of these cookies. But opting out of some of these cookies may have an effect on your browsing experience.
Necessary Siempre activado
Necessary cookies are absolutely essential for the website to function properly. This category only includes cookies that ensures basic functionalities and security features of the website. These cookies do not store any personal information.
Non-necessary
Any cookies that may not be particularly necessary for the website to function and is used specifically to collect user personal data via analytics, ads, other embedded contents are termed as non-necessary cookies. It is mandatory to procure user consent prior to running these cookies on your website.
GUARDAR Y ACEPTAR
Need Help? Chat with us
¿Tienes alguna duda?
¡Hola! Clica sobre el icono de abajo y podrás hablar con nosotros vía Whatsapp
Clara
Coolhunting Lab
MÉTODO 360º